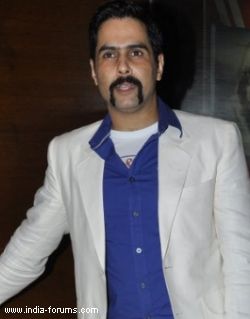 It seems Aman Yatan Verma has developed a liking for negative roles. After essaying an anti-hero in 'Na Aana Is Desh Laado', the TV actor is set to essay a character with grey shades again in Zee TV' show 'Chhoti Bahu'.

Aman will essay the role of Vishwanath. He will act as Asur (demon), an opponent against Lord Krishna?s powers, in the show, based on a girl whose faith in the Hindu god sees her through all odds.

The actor, who came into the limelight with roles in 'Kyunki Saas Bhi Kabhi Bahu Thi', 'Sujata - Ek Stree Ka Samarpan', 'Viraasat', and also did bit roles in films like 'Sangharsh' and 'Baghban', feels the role is challenging.

'This is going to be a very challenging role. I will enter the Rajpurohit house as Vishwanath, an estranged uncle of Dev (Avinash Sachdev) who had left home 18 years ago.'

'My character has shades of grey which will be kept under wraps under an able guise of a smart attire and suave look. It will be tough to play the role of an Asur battling the God himself. Looking forward to the challeng?,' Aman said in a statement.

But what is this newfound love for negative roles?

'I like how people love to hate me. That's a gratification. In this show, they needed an actor to match the intensity of the main lead. So here I'm,' he said.

Isn't he skeptical about being typecast?

'As long as I am acting and doing my best, I can sleep peacefully every night, feeling content,' Aman said.

Tazzi 8 years ago Avinash You're just amazing pitted against AV.

avinashrubina. 8 years ago HEYY U DID A VERY GOOD JOB AS ASUR ...NJOYED UR ROLE

avinashrubina. 8 years ago dats going to be verz interesting to see...welcome to cb

Welcome to Choti Bahu all the best!!

-Anarkali. 8 years ago Hope this track brings much more fun...!!! Anyways..,as we all know Krishna godly power will surely win.. against anything...:)

fatssrilanka 8 years ago Thnx for the article. I would love to see Kanha making Dev much more stronger to face this mystery man & I hope Radhika comes back & together with Dev fights with this demon with Kanha as the guiding force. I think it would be interesting to see Kanha fighting against evil.A real face off between good vs bad,truth vs evil & God vs demon.

xxMATSxx 8 years ago Im sorry but is he combg as a person or a demon or a demon in human clothing? Either way im so annoued with this show cause its not a mytholoical show! Wheres the real radhika? Why r they still showing her as kanha? Its sooo annoying.

rani-lucki 8 years ago aman was great as a villian in na ana is desh and i hope he does his best in choti bahu :-)