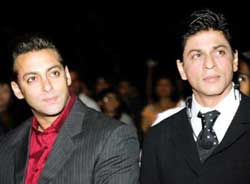 For about a year now, people have speculated about Shah Rukh Khan and Salman Khan's estranged relationship. They were two actors who used to be very good friends, but suddenly stopped talking to each other. It all came to out in the public eye and garnered media attention when Salman recently called Shah Rukh insecure on camera.

After noticing the fact that their relationship was going sour, Farah Khan, their mutual friend, tried to to help clear things up. However, both actors adamantly refused to patch up. Their clash is not media speculation anymore because Shah Rukh has confirmed it himself.

The King Khan also recently admitted that he no longer speaks to Salman and that Salman chooses not not to talk to him. He is completely fine with it. Shah Rukh does add that they do not try to avoid each other, but neither do they go out of their way to greet each other either. He feels that both of them are successful in their individual places and have their share of hit movies.

Well BollyCurry only hopes that the two Khans settle their differences and once again share the easy camaraderie of 'Karan-Arjun'.
10 Likes

Jaya Saha to be Arrested by the NCB Soon: Report
21 minutes ago

Shaheer Sheikh opens up on getting offers from Bollywood in ...
44 minutes ago

"This NEWS is FALSE, MALICIOUS & MISCHIEVOUS": Nikhil Slams ...
52 minutes ago