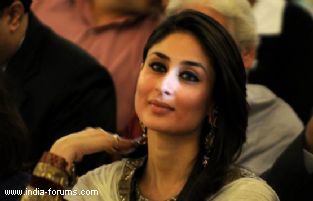 Actress Kareena Kapoor says her 'sister-in-law' comment regarding Katrina Kaif on chat show 'Koffee With Karan' was in fun, and that it shouldn't be taken seriously.

Kareena caused a flutter when she referred to Katrina as her sister-in-law, and even said that she would dance to Katrina's hit songs on her cousin Ranbir Kapoor's wedding. Ranbir and Katrina are rumored to be dating, and Kareena's comment only fueled those rumors.

Now Kareena has spoken out about it.

At the Big Star Entertainment Awards red carpet here on Wednesday, when Kareena was asked about calling Katrina her sister-in-law, she said: "It ('Koffee With Karan') is a fun show and it is meant to be like that and that (Katrina as my sister-in-law) is not meant to be taken too seriously. It is not such a big deal."

"I am his (Ranbir Kapoor) elder sister and being that, I can say whatever I want to," she added.

xxMATSxx 6 years ago So what. Its all in good fun.they dont have to be getting married. But that would be really cool.

Sanaya.Barun 6 years ago Aw ! when she said I'm his elder sister and i can say whatever i want to ! :)