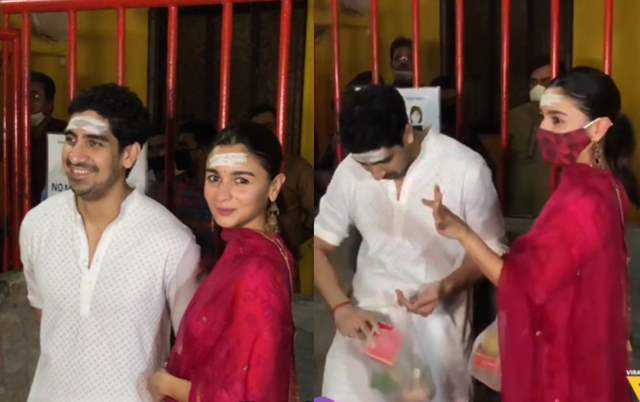 Alia Bhatt is currently the talk of the town. From her line up of releases to her lovey-dovey relationship with Ranbir Kapoor, the young diva has been making headlines since a few days now.

This time it's her cute banter with the paparazzi that is making her viral on social media.

It so happened, on the auspicious occasion of Mahashivratri yesterday (March 11, 2021), Alia, along with her close friend and the director of her upcoming film Brahmastra, Ayan Mukerji visited Shiva Temple to perform puja. And the paparazzi were already stationed at the temple to capture the glimpses of the duo and as soon as they arrived, the paps outside the temple went clickety-click.

As always, Alia looked gorgeous but keeping the Temple visit in mind she kept her attire simple and traditional. She was seen donning a red Salwar Kammez and kept her make up minimal. On the other hand, Ayan Mukerji too kept it simple in a white Kurta Pajama.

Generally, we see the trio of Alia Bhatt, Ayan Mukerji and Ranbir Kapoor making any sort of appearance. However, this time we missed seeing Ranbir Kapoor as he is isolation recovering from Coronavirus.

It was recently that his mother Neetu Kapoor confirmed that Ranbir is COVID-19 positive. She made a post on social media and wrote, "Thank you for your concern and your good wishes. Ranbir has tested positive for Covid-19. He is on medication and recovering well . He is in self quarantine at home and following all precautions."

Reportedly, after Ranbir Kapoor tested positive, Alia Bhatt too took Coronavirus test which came out to be negative. Guessing Alia prayed for the well-being of her boyfriend.

On the work front, Alia has big films lined up for release. She will be seen in Sanjay Leela Bhansali's Gangubai Kathiawadi. The trailer of the same released recently and she managed to woo everyone with her impeccable performance. She also has Brahmastra along with boyfriend Ranbir Kapoor in kitty.