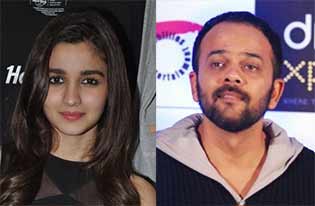 After teaming up with the likes of Karan Johar and Imtiaz Ali, Alia Bhatt wants to work with Rohit Shetty, known for churning out hit potboilers such as "Singham" and "Chennai Express".

After making a start with out and out commercial film "Student of The Year", Alia turned to Ali and Abhishek Verman for "Highway" and "2 States" respectively and both the films gave her ample opportunity to prove her versatility.

The roles in both the films were as different as chalk and cheese and the 21-year-old passed with flying colours, thanks to her spontaneity, naturalness and ease in front of the camera.

While pursuing meaty roles, she is equally interested in typical commercial cinema.

"I want to do all the commercial films. I want to work with Rohit Shetty... (Okay with) full comedy and action, but a good role," Alia told reporters in a group interview.

Alia watches all the films of her competitors.

Her contemporaries and competitors are Parineeti Chopra and Shraddha Kapoor.

"HSKD is an out and out love story. The last love story was 'Jab We Met'. There has been many romantic-comedy, but not a typical love story whereas 'HSDK' is all an all love story and in a modern way fits in 2014 idea of love rather than what was 15 years ago."