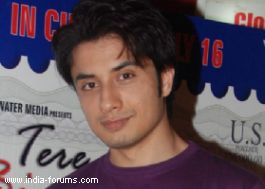 Confirming the news, director of the film E. Niwas told IANS: "Yes, I am making a film which stars Ali Zafar and Yami Gautam. It's a love story."

To be produced by Neeraj Pandey's production house, the film is reportedly about a Pakistani boy and an Indian girl.

"The film is tentatively titled 'Aman Ki Aasha' but we are contemplating other titles as well. Let's see how things fall in place. The film will go on floors in March 2013," said Niwas, who earlier directed "Shool", "My Name Is Anthony Gonsalves" and "De Taali", among others.