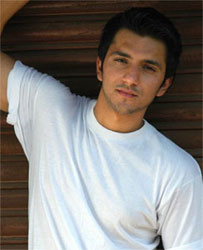 Remember the character of Rituraj, played by Ali Merchant who was the first guy in Akshara aka Hina Khan's life in Star Plus' Yeh Rishta Kya Kehlata Hai, produced by Rajan Shahi.

The actor essayed a cameo role earlier wherein he succeeded in bringing out the feelings of love in Akshara. And now when Akshara is all set for marriage with Naitik (Karan Mehra), her first love reappears!!

Yes, you heard it right!! Ali Merchant is back in Yeh Rishtha, and this brings a new twist in the tale!!

According to our source, "Engagement preparations are on when we see the reappearance of Rituraj. This gives rise to a complex situation as he happens to be the first guy in the life of Akshara. She will go thro' all the troubled moments upon seeing him, and the fact that Naitik is not aware of Rituraj and Akshara's earlier relationship will add on to the situation".

Earlier, Rituraj and Akshara had seen each other, and the alliance was almost finalized, when the guy decided to call it off, as he was not convinced with Akshara's desire to seek a future in singing.

Will Rituraj's comeback create a problem in the relationship of Naitik and Akshara? What role will Rituraj have to play in such a situation?

13 years ago He is going to create a rift between naksh relationship, how sad... but ali is great tho!!

13 years ago oh this will be GOOD! did they ever change that gaudy ring?

13 years ago I think he is the bablu that naithik does not like.

13 years ago expected still his entry is too soon so shocked..Like Ali but not Rithuraj..I hope he won''t create much problems between Akshara Naitik..maybe Rithuraj will get to know Akshara didn''t want to get a singing career and might try to win her back..but Akshara who is already falling for her Naitik will choose Naitik which''ll strengthen their relationship more

13 years ago wow he looks really nice in the picture on the middle right. He dosn''t look indian at all