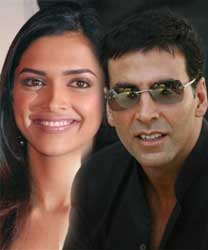 Actor Akshay Kumar is always known for his courageous acts during shooting. Recently, the actor rescued his co-actress Katrina Kaif while shooting for "De Dhan Dhana Dhan". And that is the reason he is known as "Macho" of the industry. But did you know that Akshay is a big prankster too?


At present the actor is busy with the promotion of "Chandni Chowk to China" and surprisingly its known that he had not played any pranks on Deepika during the shoot of the film. However, this was simply because she is a new-comer and he did not want to scare her.He has asked her to beware as he plans on throwing a lot of pranks on the sweet and innocent Deepika in their next film together "House Full".  Now Deepika you better watch out as our Akki dear is in a prank playing mood!


"House Full" is a Sajid Nadiadwala movie to be directed by Sajid Khan. This duo had earlier worked together for "Heyy Baby". As known the director has turned down many offers from other production houses for he had a contract of three films along with the producer.