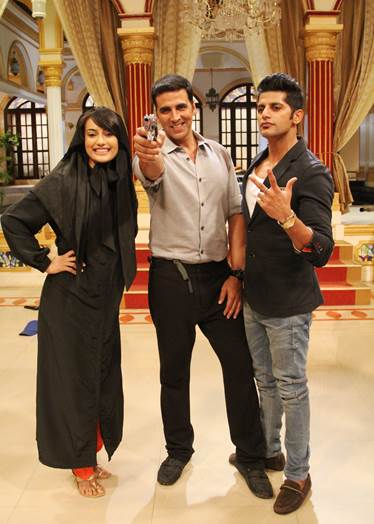 When you have Khiladi Kumar in the house, acts of dhamakedaar daredevilry invariably follow suit. And that's exactly what happened when Akshay Kumar arrived on the sets of Zee TV's popular fiction show Qubool Hai to promote his upcoming action thriller Holiday: A Soldier Is Never Off Duty'. Not only did he perform stunts that are bound to leave viewers awe-struck, but he also gave tips on action sequences to the show's leading lady Surbhi Jyoti, who has been an ardent fan of the superstar! Ever the chivalrous co-actor, Akshay was seen coaching her on the nuances of action scenes and giving her tips on how not to get hurt while performing them.

As per the track, the members of Aahil's (Karanvir Bohra) house are  held hostage by terrorists. Akshay Kumar, who will be seen as Aahil's old friend, will unknowingly land up at his house where he gets to know that his friend's family is in danger. The exciting sequence then focuses on how Akshay Kumar, like a true soldier and a real friend fights the terrorists and rescue the family from their clutches. This special episode will air on 5th June on at 9:30pm only on Zee TV.

Amidst the high octane action sequence, there will be a startling revelation which will keep the audience on the edge of their seats! Viewers will find out what is it that the ever-so-evil Tanveer (Amrapalli Gupta)  has kept hidden in the haveli for several years. It will be Sanam who unearths this dark secret, leaving the entire family stunned speechless!

Sharing his experience on the special integration Karanvir Bohra says "Akshay is one of the most disciplined actors in the industry. Shooting with him has been an enriching experience ...  one can learn so much by just observing him. No one can touch his precision when it to comes to doing an action sequence flawlessly! This special integration of Holiday will definitely be an exciting episode to look forward to!"

Surbhi Jyoti echoes the similar sentiment "There was palpable excitement on the sets during the shoot as we were in awe of the way Akshay performs his stunts with ease. I picked up quite a few tips on action from Akshay during the shoot as I have always been a fan of the action genre and would love to perform stunts and fight sequences myself someday. He was thoroughly helpful and a complete gentleman. There are a lot of intriguing twists & turns expected in the show in the forthcoming episodes. So watch out, viewers!"

How will Akshay Kumar & Sanam rescue Aahil's family? What is it that Tanveer has hidden in the Haveli? How will Sanam unearth this secret ?
97 Likes

RaniSurbhi 6 years ago Surbhi Jyoti love u lot u are awesome actress i am watching qubool hai only for u.

1d_luvah 6 years ago Love you surbhi jyoti! U are awesome as sanam

Good luck to the team.

ZYA_LVR_ 6 years ago Love you Surbhi jyothi...
You just rocks...
You are simply the best

stunningsurbhi 6 years ago Surbhi jyoti love u lot u are the best i love u lot u performed really well in that episode with akshay kumar.

surbhijyoti727 6 years ago Surbhi jyoti u are best actress in town u did great job when akki came & thank u so much for joing instagram..

Sweetsappi 6 years ago Surbhi Jyoti u are doing great job as sanam ahmed khan i love u lot
.