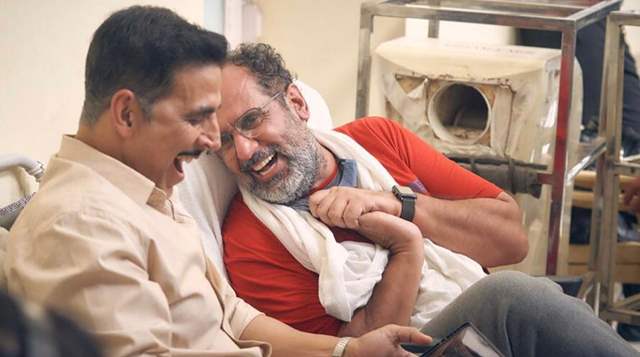 Akshay Kumar is receiving praises from all quarters for his film, Bell Bottom and his brave decision to release a big film in theatres has been applauded by all.

Now the actor and producer-director Aanand L Rai have wrapped up the shooting of his upcoming film Raksha Bandhan in Delhi.

Initially, the film went on floors in June.

After shooting on a big set up in Mumbai, the team called it a wrap in Delhi last night.

Starring Bhumi Pednekar, the film is all set to hit the theaters on 11th August 2022 – Independence Day weekend.

It is the actor-director's second collaboration after their upcoming film Atrangi re.

The film tells the story of a brother-sister bond, and reunites Akshay with his “Toilet: Ek Prem Katha” co-star Bhumi Pednekar.

When the actor started shooting for the project, he shared a post saying that he has dedicated the film to his sister.

Akshay took to social media to post a bts picture with aanand Rai and along with it has written a caption saying,

"Here’s to all I and @aanandlrai did throughout the shoot of #RakshaBandhan - laugh like there’s no tomorrow! Ironically, as we wrapped the film last night, there was a bittersweet tinge of sadness. Off to the next. New day, new roller coaster."

“Raksha Bandhan” is directed by Aanand L Rai, who has just wrapped up the shooting of the upcoming film “Atrangi Re” with Akshay. The movie co-stars Sara Ali Khan and Dhanush.

This movie is written by Himanshu Sharma and Kanika Dhillon, the film is produced by Color Yellow Productions, Zee Studios, Alka Hiranandani in association with Cape of Good Films.

Apart from this, the list of upcoming films of Akshay Kumar including “Raksha Bandhan” and “Atrangi Re” also includes titles like “Sooryavanshi”, “Prithviraj”, “Bachchan Pandey” and “Ram Setu”.

Also the actress is now looking forward to her upcoming line up, which includes 'Mr. Lele', 'Badhaai Do' .