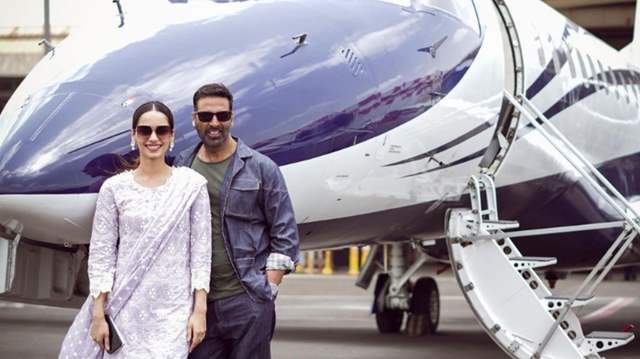 Akshay Kumar and Manushi Chhillar are currently revving up for the release of their upcoming period drama, Samrat Prithviraj. The film is slated to hit the big screens on June 3rd.

Before the release of the film Manushi and Akshay left or Varanasi to take blessings. Sharing a picture on the gram wherein Akshay can be seen with Manushi while posing in front of a private jet he wrote, "सम्राट पृथ्वीराज की टीम आज आ पहुँची है भगवान विश्वनाथ जी की नगरी, वाराणसी में. #SamratPrithviraj releasing in Hindi, Tamil and Telugu at a theatre near you on 3rd June."

In the picture Manushi can be seen clad in a mauve salwar kameez while Akshay looked dapper in an olive green tee topped with denim jacket and pant. The makers of Akshay Kumar's upcoming historical drama, recently changed the title of the film after receiving a lot of anger and resistance from the Shri Rajput Karni Sena.

As desired by the aforementioned group, the film will henceforth be titled 'Samrat Prithviraj.' Yash Raj Films recently wrote Karni Sena an open letter in which they agreed to modify the film's title and praised them for pointing up the problem with the prior title.

The letter read, "As per the multiple rounds of discussions between us, and to peacefully and amicably resolve the raised grievance, we will change the title to 'Samrat Prithviraj'. We are highly appreciative of the mutual agreement reached between us that you have no further objections with regards to our Film and that all other points raised by you earlier are no longer a point of contention between us. We thank Shri Rashtriya Rajput Karni Sena and its members for understanding our good intentions pertaining to the depiction of the great warrior in the film."