Ajaz Khan who's first venture into television was through Balaji Telefilms show Karam Apnaa Apnaa has not looked back from then. He later made his presence felt in serials like Kya Hoga Nimmo ka, Rahe Tera Aashirwad and many more. 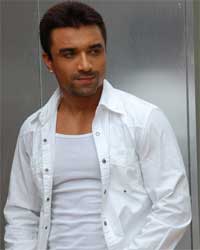 As reported earlier by TellyBuzz, Zoom TV is coming up with a weekly series of short stories related to the life of Bollywood Stars; basically a link between Crime and Bollywood together. The stories will be adapted from certain aspects of the film stars' lives.

According to our source, "The channel has already shot for a story based on the life of Sanjay Dutt and his case of AK 47, and Ajaz Khan will be depicting the character of Mr Dutt."

When contacted, Ajaz the aspirant actor asserted, "Yes I'm depicting Sanjay Dutt and my character name is Ranveer. It has been a mind blowing experience firstly as I'm a huge fan of him, and secondly to be the lucky one chosen from the other 200 people who auditioned for it."

Elaborating on the idea of being associated with the show he exclaimed, "The basic concept of the show is to portray the life of those Bollywood stars who have faced negative publicity even after being innocent. I liked it a lot and also the channel people felt I have a great resemblance to the actor, so I had no reason to refuse it."

This episode is expected to be telecasted in the first week of July.

Salmanisthebest 10 years ago oh i thought of ejaz kahn who this lallo???/////

~*puja*~ 11 years ago Indian films and horror subjects don''t mix well, but wish Ramu all the best on that!!!

ibelieveinpink 11 years ago I don''t get the whole Steve martin thing, but India needs to make moe good horror films! Thanks!

Jenifer. 11 years ago don''t do horror movies!
quick question...why does it say ''steve martin'' in the title? kinda mis-leading!

Sushant Singh Rajput case: NO clean chit given to Bollywood ...
18 minutes ago

Bigg Boss 14: Abhinav Shukla and Rubina Dilaik to be a part ...
54 minutes ago