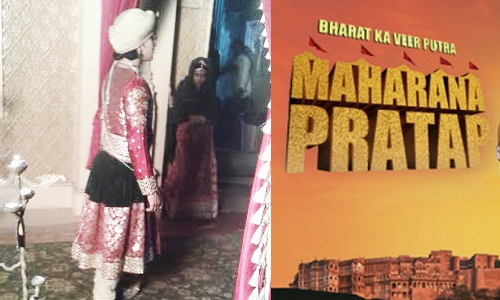 Contiloe's historical show Bharat Ka Veer Putra - Maharana Pratap on Sony TV is gearing up with an interesting track where the audience will witness the eternal bond of friendship between the adorable princesses Ajabde and Phool Kanwar as they both will be seen sacrificing their love for each other.

Till now it has been shown that Ajabde (Roshni Walia) and Pratap (Faisal l Khan) love each other whereas Phool Kanwar (Jannat Zubair Rahmani) also loves Pratap. Thus Phool and Pratap are getting married for the sake of their regime.

Thus in the upcoming episode the viewers will get to see a twist in the tale.

Our source informs us, "Phool Kanwar who is aware that Ajabde and Maharana Pratap love each other, will write a letter to Ajabde stating that she has no problem if they get married and she is ready to sacrifice. But unfortunately Ajabde will not be able to read the letter due to some circumstances. On the other hand Ajabde has already scarified her love for friend Phool Kanwar and has agreed to get married with Toranmal. Toranmal's proposal will be brought by Uma Devi (Mrinal Deshraj) as she also want Phool to marry Pratap.

"When Maharana Pratap will come to know about the fact that Ajabde has agreed to get married to Toranmal, he will get furious. Her will warn Ajabde that if she doesn't marry him (Pratap), he will kidnap her and then will marry her. This will make Ajabde worried as she doesn't want her friend Phool to get hurt. Hence Ajab will try to run away from the palace by covering herself with a blanket. But her efforts will go in vain as Pratap will catch her and will take her back in the palace," adds our source. 6 years ago Pratap Ajabdeh moments gives sheer pleasure to me ;)