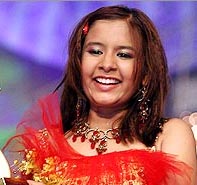 Last week, we had written about Akriti Kakkar opting out as anchor of Star Plus' Mummy Ke Superstars due to date problems. Producer Fazila Allana of SOL had also quoted to Telly Buzz that they will now be looking for a rotating second anchor situation.

The latest development is that Aishwarya Majumdar, Winner of Chote Ustaad will be seen anchoring with Ali Asgar this week.

Confirming this news, Producer Fazila said, "You will be seeing Aishwarya hosting the show this Saturday. We have not decided on the coming weeks. Also there is a possibility of Akriti returning for the Finals".

Aishwarya was recently seen hosting few episodes of Nach Baliye 4. We tried calling her, but she was unavailable.