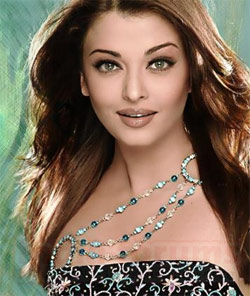 Featured Video
that she is in the family way.

'I am not pregnant,' Aishwarya, looking as glamorous as ever in a formal black suit, told reporters at a press conference at the PVR Ambience shopping mall here, on the outskirts of Delhi.

Aishwarya, along with her husband Abhishek and father-in-law Amitabh Bachchan, was here to launch the Idea Sarkar Raj Yatra.

She also dismissed reports that the couple had bought a bungalow in Dubai to hide her pregnancy from the media.

'I am sitting here in front of you. So, it is not true that we have got a bungalow in Dubai to hide (pregnancy) from the media,' she said.

Abhishek added: 'We are not expecting a baby. In case we do, we will let you know. We will not rob you of that moment.'

She also clarified that she had not worn Rs.1 million-worth shades in 'Sarkar Raj', that stars all three of them, as reported in the media earlier.

'I am not wearing a Rs.1 million worth sunglass in the film as reported by the media,' she said.