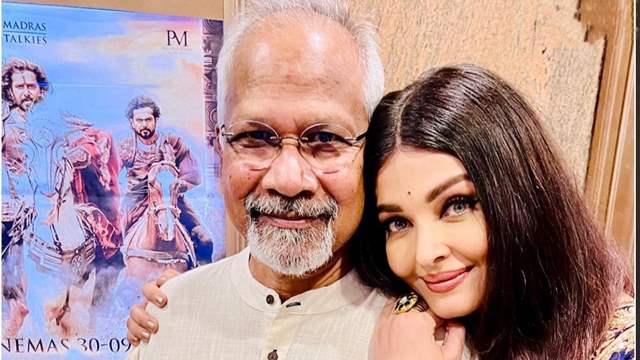 Mani Ratnam’s magnum opus Ponniyin Selvan 1, a much-awaited period drama, has long been making fans eager about the release. Finally the film has reached the audience enao and have been receiving a positive feedback from all quarters.

The film also marks actress Aishwarya Rai Bachchan's reunion with her guru, filmmaker Mani Ratnam for ‘Ponniyin Selvan: I’ and their work has left fans impressed.

The film recorded a positive opening at the box office and Aishwarya penned a special note celebrating the success of ‘Ponniyin Selvan: I’. Aishwarya Rai Bachchan rarely posts on social media but she marked her reunion with Mani Ratnam on Instagram with a series of rare photos.

The actress had captioned the pictures with heart and evil eye emojis. Early estimate suggests that ‘Ponniyin Selvan: I’ has earned close to Rs 20 crore on its opening day. Aish looked eternally beautiy in a golden and blue colour dress and she dearly posed with the director.

According to reports, Mani Ratnam‘s magnum opus will break Tamil cinema box office records and will emerge as the best-opening Tamil film of the year

‘Ponniyin Selvan: I’ is a period drama inspired from a book by the same name. The film features Vikram, Jayam Ravi, Karthi, Trisha Sarathkumar, Vikram Prabhu, Aishwarya Lekshmi and Sobhita Dhulipala among others. Mani Ratnam plans to release the film’s sequel in 2023.