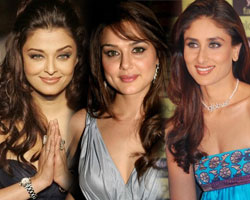 Tentatively titled Heera Mandi, the project is said to be based on the infamous red light area in Lahore and has been under consideration for a while.  Originally, the director had planned approaching Madhuri Dixit, Rani Mukherjee and Sonam Kapoor for the roles.  But maybe the thought of bringing together Ash, Bebo and Priety in principal roles for the first time was too good to ignore? Or perhaps he was just playing safe with the current top faces.i

Currently busy with the shoots of the Hrithik-Ash starrer Guzaarish, SLB plans to start on Heera Mandi once that wraps up.