View Profile
Much has been talked about Kismat Konnection and its connection with pranky Shahid and his prey on his co-stars. We are little bored of the matter now. But how can we be bored with stars and their whimsical pranks!

And this time we are back with some massaledar chat from the spots of Shyam Benagal’s Mahadev Ka Sajjanpur where Mr. veteran is busy canning comic frames of 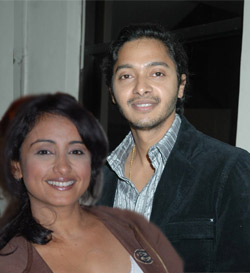 Though the film happens to be a comic one but the shooting schedules are as usual very blank and mundane without some salty touch of pranks. Thus, Divya Dutta, known to play pranks on her fellow actors, made Shreyas her recent victim.

The story goes like, Divya came out with a naughty plan of calling up Shreyas in his hotel room pretending to be his fan. The actress made good use of her mimicry talent and called up Shreyas in a male’s voice asking him to meet her in the lobby. Divya even threatened Shreyas that if he doesn’t come down, he would come up only to make a scene.

Innocent Shreyas decided to obey his fan by giving an autograph. But when he reached the lobby he couldn’t find anyone. What he got is another call from Divya, in a male’s voice, now requesting him to meet at some other location in the hotel. But again Shreyas found no one at that location. His phone rang again. On the third call the actor got irritated and told Divya that he is seated in the hotel’s coffee shop and better he (she) come there and get the autograph.

While Shreyas was enjoying his coffee, Divya came from behind and called for him again in the same male’s voice. Shreyas turned and was shocked to find Divya in front of his eyes. Shreyas took the prank sportingly and both had a hearty laugh. Latter the unit members came to know about the incident and they started teasing Shreyas asking for his autograph.

As the Shahid-Vidya starrer Kismat Konnection and its much airy scrappy prank stories made an invisibly clear bondage between the stars, here also we can expect something like that. But, Shreyas, you are married. So, better be a Mahadev but never try to be sajjan yaar!