View Profile
Himesh Reshammiya can now breathe a sigh of relief, and maybe also start panting in excitement. T-Series's Kajraa Re, directed by Pooja Bhatt, was announced some time back with Himesh in the lead. But it seemed to have got stuck somewhere down the line as they could not identify the right heroine to costar with him.

The film being an Indo-Pak love story, the producers were keen 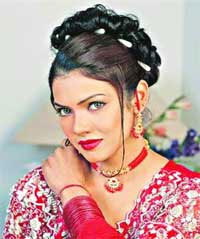 Featured Video
to sign on a Pakistani heroine. It may be remembered that the Bhatts brought in Meera from Pakistan with much fanfare and tingling controversies when they cast her in Nazar. The hype proved to be of no help though at the box-office and Nazar flopped badly. But t kept Meera in the news and with hope in everyone's eyes. Understandably, Pooja Bhatt must have been extra-keen to get another heroine from across the border, especially as this was a love story catering to both countries.

T-Series and Pooja Bhatt have finally found their leading lady for Kajraa Re and Himesh. It is Mona Laizza, a popular Pakistani television actress. Hope the chemistry between Himesh and Mona Laizza will be as unusual as the leading lady's name and the leading man's nasal singing!

Said T-Series creative director Divya Khosla Kumar:"We were looking for a girl who had the innocence in her and was from Pakistan. It was not easy, Kajraa Re being an Indo-Pak love story. We checked out more than 70 girls and finally zeroed in on Mona Laizza. The look of the film is different and we are still in the process of finalising the look of the characters."

The director, Pooja Bhatt, added, "Javed Sheikh was instrumental in helping us get Mona. She fits the role opposite Himesh perfectly and we are hoping Javedji will also do an interesting role in the film."

The love story stars Himesh as a lawyer and will be shot in Lahore, Morocco and Europe. Everyone hopes, of course, for the sake of the two brotherly nations if no one else, that Mona Laizza proves luckier for Pooja Bhatt and the team of Kajraa Re than Meera's Nazar. (SAMPURN)