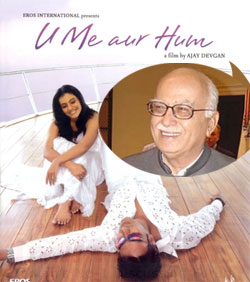 Ajay's film, that releases April 11, delves into the institution of marriage through the story of three couples. The film is about how no marriage can be complete without problems.

'Member of Parliament Ravi Shankar Prasad arranged a special screening of the film Saturday in New Delhi for Advani, who gave it a seven-minute standing ovation while the credits were being shown,' said a source close to the actor.

'The film touched my heart,' Advani, who started his career as a film critic, told media persons. He came with his wife Kamla to watch the film.

Apart from Ravi Shankar Prasad, BJP leader Sushma Swaraj was also present at the screening as were the actors Ajay, Kajol and the rest of the star cast including Karan Khanna, Sumeet Raghvan and Divya Dutta

Advani, who in a recent interview said he loves watching movies, had also attended the special screening of Aamir Khan's directorial debut 'Taare Zameen Par' last year. The film moved him to tears.