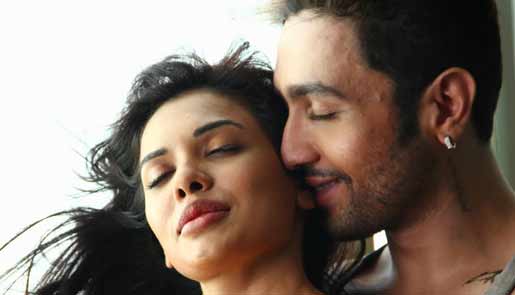 While shooting for a romantic number in 'Ishq Click', Adhyayan Suman and Sara Loren got so carried away with the sequence, that they shot it entirely in the first take. It was one of the initial days of the shoot and the entire team was mesmerized by their breathtaking effort.

It was for a song where, both the leads of the flick were to romance each other. The undisclosed song is a deeply romantic number and it was very important to get the outcome of the video on similar levels. Adhyayan and Sara were briefed about it by director Anil Ballani. and after a good communication between both the parties, they went ahead with the shoot.

Both went in as thorough professionals and did more than what the entire team had hoped for and were so lost in the flow that even music director and producer Ajay Jaiswal was left speechless!

The technical team too, had a lot to do and were very appreciative of their efforts. After the shot was done, everyone clapped on the sets. Both Adhyayan and Sara were blown away when they saw the raw clip!

Ishq Click is an intense love story that sees Adhyayan Suman playing a photographer and Sara Loren his love interest. The movie is directed by Anil Ballani and produced by Ajay Jaiswal of Algol Films.
0 Likes