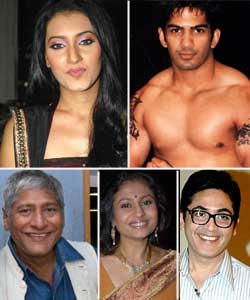 Chota Ganpati Telecreations, makers of shows like Babul Ka Aangann Chootey Na on Sony TV and Do Saheliyaan - Kismat ki Kathputaliyaan on Zee TV are now working on their next show which will be for the revamped Star One, which will go on to be called Star Desh.

The show will be a very different entertainer with a strong story line, with prominence given to every character. The show will be light-hearted with its unique emotional moments.

As of now, the pilot is being shot after which the channel's approval will be awaited. If all goes well,  the show will be on floor by mid August.

On the casting, our source states, "Additi Gupta who was last seen in Sanjog Se Bani Sangini will play the lead. She will have a very cute character to portray. Amit Tandon who was last seen in Dill Mill Gayye has been finalized to play the male lead. Veteran actors Rajendra Gupta, Asif Sheikh, Jaya Bhattacharya play prominent roles".

When contacted, Rajendra Gupta confirmed that he has shot a pilot for the show, but refused to get into details.

Asif Sheikh said, "This is the first time I will be part of a non-comic show. All I can tell you is that this has a refreshing story line".

We tried contacting Additi Gupta and Amit Tandon, but they were unavailable.

If sources are to be believed, this will be for the first time that a Korean hit show is being remade in India.

All our attempts to get in touch with Producer Ratna Sinha were futile.

Let's now wait for this show to go on floors..

+ 3
9 years ago aditi and amit? no yaar. aditi shud come with arjun bijlani ya kuch!!

9 years ago was so happy but they replaced AG with aditi t hate it...not gona watch that show anymore

9 years ago when is this hsow starting ...cant wait to see aditi back

+ 3
9 years ago Just hope it doesnt drag.. Korean shows last up to 16 episodes and each character has a purpose. Well will see how this goes.. wish em all the best :)

+ 3
9 years ago Love you so much Additi :D
Waiting for the new show :D