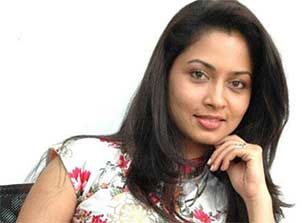 Tamil actress Pooja Umashankar, who has played roles as diverse as a blind beggar and a biryani shopworker in her career, doesn't mind looking ugly on screen for the sake of a character. But she says not many actresses are comfortable facing the camera without makeup.

"Actresses don't like to look ugly on screen...they get very conscious without make-up," Pooja told IANS

"I have always challenged myself with offbeat roles that didn't require me to look good, therefore, never had a problem looking ugly. Most actresses rely heavily on make-up because they feel audiences won't accept them without it," she added.

"I enjoy playing strong character roles, but I enjoy doing glamorous roles even more. In the beginning of my career, I got plenty of opportunities to doll up, but that time I was naive. I wish I get such opportunities now because now I can do it much better," she added.

She is making a comeback to the industry after four years with forthcoming Tamil thriller "Vidiyum Munn", but she doesn't feel that her absence has impacted her career.

"Cinema has a big heart and there's enough place for everybody in it. I'm not worried because I have found my feet in this industry and I'm happy about it," she said.

"Since I'm back, I need to realise what kind of roles suit me now. I have tried my tricks and survived the first few years of my career with roles that didn't mean much. The offbeat roles gave me more satisfaction than any other roles," added Pooja, who was busy working in the Sri Lankan film industry while she was away from Tamil cinema.

Soon after her role as a beggar, call it destiny, Pooja landed the role of a princess in a Sinhalese film titled "Kusa Pabha".

"It always bothered me that people saw just the beautiful side of my personality. I wanted to be known for my roles, not for my beauty. Hence, I decided not to pick any film that comes my way and wait for something exciting. Meanwhile, I did a couple of Sinhalese films and they were blockbusters," she said.

"I wanted to do a film I could be proud of because I was particular that I didn't want to get typecast. Moreover, my parents wanted me to take a break. To keep them happy, I obliged to their request," she added.

The 32-year-old is glad she waited for director Balaji K. Kumar's "Vidiyum Munn".

"This is the kind of film I can show to my kids. I'm glad I waited for it and I'm extremely happy with the end product. The sheer heaviness of the script inspired me to do it," said Pooja.

"I regretted not doing Bala sir's 'Paradesi'. I thought I would never get a chance to do such films again until 'Vidiyum Munn' happened. Some films excite you when you listen to the story, but get messed up in the execution process. But this film was even more engaging to watch than it was while it was narrated to me," she said.

Pooja is here to stay and wants to go beyond ordinary films.

"I badly want to do exciting films... I want to do films that bring out the extraordinary in me," she said.

Before Amitabh Bachchan, Don (1978) was offered to three other actors, ...

Kangana Shares Video of Anurag Confessing To Have 'Abused a ...
21 minutes ago

Sara Ali Khan & Shraddha Kapoor Likely To Be Summoned By NCB ...
58 minutes ago