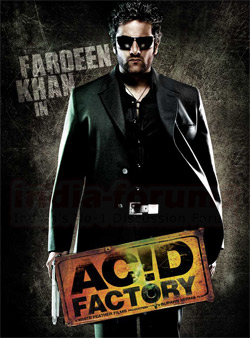 Featured Video
xperimenting with various looks and getting them right! Right from the days of Kaante to Musafir, to Shoot Out at Lokhandwala, the trend has been followed, and now the same is seen in Sanjay Gupta's White Feather Films project, Acid Factory.

An inside source from the unit confirms, "Prashant, the trainer who helped SRK get his much-publicized six-pack ab, is giving the actors of Acid Factory a tough time training them during the shoot of the film in Hyderabad".

It is also learnt that Fardeen Khan is being given a rough and tough look in the film, and Prashant confirms this as he says, "I was given a briefing by Sanjay about the look and role of Fardeen, he is very keen to get Fardeen's look right. I am also training on Aftab Shivdasani, Danny Denzongpa, Irffan Khan and Manoj Bajpai for the film".

Acid Factory which is directed by Suparn Varma has been having the training schedules for the past one month. Facilitating Prashant's training schedule with perfect dietary regime is his wife and dietician, Maya. The dietician wife is taking care of the shape of actors Fardeen, Aftab, Manoj and Irffan. It is also said that she was the woman who advised SRK on his daily dietary intake.