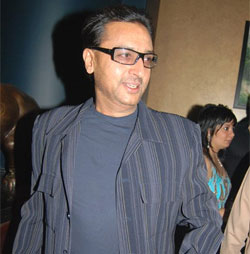 Featured Video
advertisement for the People for the Ethical Treatment of Animals (PETA) India.

'I am a villain only on screen. However, there are real-life villains who treat animals badly, whether in Mumbai or New York,' said Gulshan in a press statement.

'I urge India's citizens to help stop animals' needless suffering by insisting that their local governments and police enforce laws against cruel transport and poor treatment of animals,' he said.

Natasha Paul, campaigns coordinator for PETA India, said: 'The only way to truly ensure that you are not contributing to the suffering of animals killed for their skins and flesh is never buy leather and adopt a healthy, delicious vegetarian diet.'

In addition to Gulshan's campaign, PETA gained high-profile support from the Dalai Lama, Paul McCartney, Pamela Anderson and Jackie Chan and others.

Designers like Hemant Trevedi, Anita Dongre and Stella McCartney, among others, use materials instead of leather for their creations.