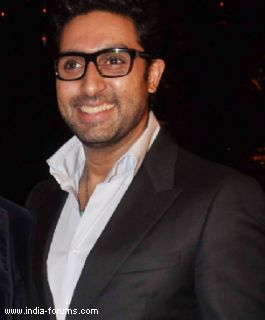 It's Abhishek Bachchan's turn to show daredevilry and he did it in 'Players' - the actor performed some risky stunts in the forthcoming action-thriller all by himself and it impressed the director duo Abbas-Mustan.

During the action sequence, the actor balances himself atop two trains, running at the speed of about 100 km an hour. Abhishek admits it was tough.

'Hanging between the trains...good fun, though it was a bit tough. To get the right positioning was tough but ultimately it was done, we got what we wanted so we are happy,' the 35-year-old actor has said in the 'Making of Players' released recently.

The action stunts, directed by Allan Amin, see Abhishek hanging through a harness and fighting for the gold. The actor even hit his head on one of the rods on the train but it didn't deter him from completing the scene.

'Abhishek has given a good shot. The trains are running parallel and he hung between the trains and gave a very real shot. We were a bit tensed as well as Abhishek struck his head on a rod,' said the director.

'Naagin 5' To Welcome Two New Entries in The Form of Karan ...
19 minutes ago