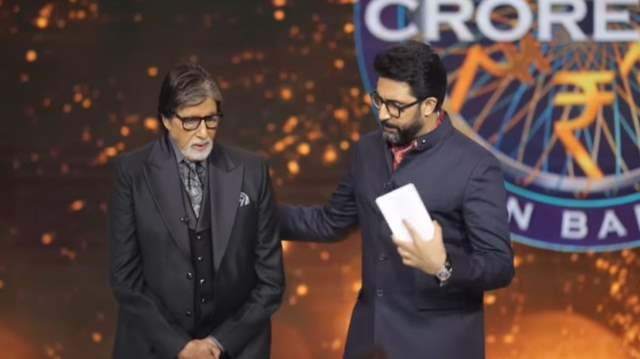 Today, the living legend of our fraternity, Mr Amitabh Bachchan marks his 80th birthday. The actor who has led a life filled with inspiration and motivation for others is loved by every single person.

While the veteran actor have been flooded with wishes and greetings from all around the world, his family members have planned something really special for him.

As we know, the actor is currently hosting the 14th season of the game show 'Kaun Banega Crorepati', Abhishek Bachchan planned a special appearance at the show along with his mother Jaya Bachchan.

Abhishek took to his social media handle and offered his followers a glimpse at how the whole thing was organised with the help of Sony. In the video we could see clips of Amitabh getting all teary and emotional as Abhishek narrates a message for him. He also gets overwhelmed when Jaya arrives and feeds him sweet. The clip itself is so wholesome, you will have a beaming face at the end of it.

"It took a lot of secrecy, a lot of planning, a lot of hard work, and a lot of rehearsals to get it right. But then again, he deserves no less! It was very emotional to be able to surprise dad and celebrate his 80th Birthday at the place he loves the most, his workplace.My gratitude to the entire team of Sony and Kaun Banega Crorepati for helping me do this and making tonight’s episode so special for my father. Do try and see it if possible. KBC on 11th October at 9 pm IST only on Sony TV. @amitabhbachchan #HappyBirthdayAmitabhBachchan #AB80"

This episode will be aired today on Sony Tv.

+ 9
3 months ago sharing the same b day is blessing