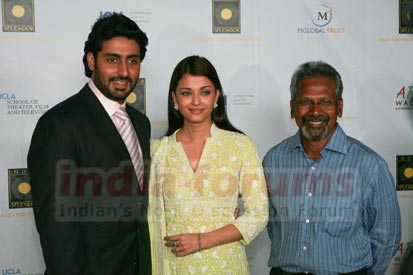 On the eve of Independence Day, a crowd of Indians and Americans waited patiently at the gate of India Splendor, in Los Angeles. Just a glimpse of the Junior Bachchan and his newly-wed wife made the wait worth it. The couple, accompanied by Mani Ratnam, director of "Guru", was there to attend a special screening of the film on the occasion of the 60th anniversary of Indian Independence. After all, there couldn't be a more appropriate film from the recent past which highlights the success of an Indian in the global business scenario.

Screening over, Abhishek and Aishwarya mingled with the people and media to talk about the film, their lives and today's India. All the while they held hands, and every now and then, shared sweet nothings and smiled at each other. Earlier in the day, the couple had attended a tea party in honour of the film.

"I am happy to have had the opportunity to represent India on a global platform and I am delighted to be attending the screening of the film "Guru" at India Splendor," said Aishwarya, adding that she had "extra-special memories" attached to the making of the film. "Firstly, Mani Ratnam was the first director I had ever worked with. Secondly, my husband proposed to me at the premiere of this film," she smiled. Aishwarya has
Featured Video 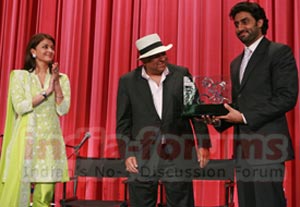 no qualms about changing her name to Aishwarya Rai Bachchan on the credits of the movie. "That's my name and that's what will be on the credits", she clarified.

So what/who made her sign the role in "Guru"? "I loved my character in the film," the actress said. To this, Abhishek remarked jokingly: "And I thought you took up the role to spend more time with me!" When the actor went overboard praising his wife, she stepped in to change the conversation. "She is one of the most down-to-earth actresses I know and she gives her blood and sweat for her films," the proud husband rattled off.
When asked about his discomfort with the term 'Bollywood', Abhishek elaborated: "After so many years of independence and the fact that the Indian film industry is the largest film industry in the world, with its own
identity, it is inaccurate to call it Bollywood, a term copied from Hollywood."