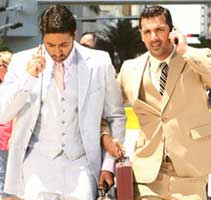 Bollywood Actors Abhishek Bachchan and John Abraham's sizzling jodi may soon give the Bipasha Basu and John jodi a good competition. Watching the film, one can feel the chemistry that's brewing between these two guys.

In fact, in Tarun Mansukhani's Dostana, there is a sequence where Kiron Kher's character dreams that the two are a gay couple. There is even a song to go along with that Maa Da Laadla. Kiron's character even supposedly imagine them getting married to each other, with John as the groom and Abhishek as the bride. But jokes apart, the two actors share a terrific rapport on-screen and it is just a reflection of the comfort level that they share personally. Obviously, the shooting schedule in Miami, gave them enough time to bond with each other. Also, stylistically speaking, they seem to complement each other. Abhi with his laid back style and Bollywood Actor John with his pumped up look. So, the perfect couple one would say.