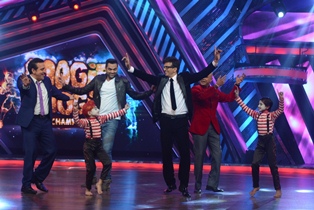 Sporting a mini - guitar and a leather jacket, the versatile Abhay Deol made a dhamakedaar entry on Boogie Woogie to promote his upcoming film 'One by two'.

During the show, when Abhay was informed about Aryan's singing capability, he quickly offered to teach him the song Pakaoed'.

Both struck to the right chords much to the applause of the audience. Later, Tanya too requested him to shake a leg with her on the song 'Senorita' to which the actor gladly obliged.

The fun does not stop here! The masti and entertainment reached new heights when Preetjot took stage. After his dazzling performance, all the judges and Abhay made their way to dance with Preetjot as well. Abhay even showed off some bhangra moves.

Looks like the contestants on the show have unearthed a few hidden talents in Abhay.

+ 4
10 years ago Dipika would win this because i like her clutch bag.

+ 5
10 years ago i jus like bips hairstyle...lol
dnt like the dress so dnt find either of thm better than the other!

+ 7
10 years ago deeps looks better in this..bips i have lost interest in her after too glamourous approaches..

+ 5
10 years ago sonam wore this type of dress to kwk and then everyone starting wearing it! lol sonam is a trendsetter in bollywood for sure!!