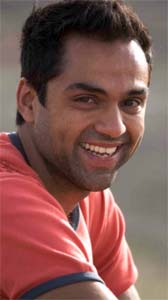 Abhay Deol is cool. The best thing since sliced bread.


Well for one, he's a terrific actor who we get to see in mainstream as well as offbeat films. This one's a trooper, who doesn't care a molecule for banner names. He is also a fantastic writer, judging by the fantastic work his pen crafted for 2009's fair hit and critically praised 'Dev.D'. Lately, he's been cool because he's voicing for the dignity of mutes, namely bears.


You've probably seen a dancing bear on your way back to your apartment. Doesn't it feel a little strange to see such a majestic creature dancing on the streets for entertainment? If dance-waale bars should be banned, then so should the forced entertainment that animals are compelled to put up.


This is exactly what Abhay Deol feels. Thus, he has joined hands with the Wildlife S.O.S. NGO which aims to return used and abused animals their dignity. Through this association, Abhay Deol wants to represent his initiative to respect bears, and wants to request everyone else to stand up for them as well.


We're game guys. It's not cool to make bears dance on the streets for entertainment- it's just degrading. Lets voice our opinions against such practices together!
5 Likes

Huma Qureshi Loses Cool; Says She has been 'Unnecessarily ...
30 minutes ago

2020 is Turing Out to be a Fruitful Year for Prabhas!
30 minutes ago