Only seventeen years old, Abhaas Joshi has many accomplishments to boast of. Before being a part of Amul STAR Voice of India, Abhaas has been a runner-up in Master Madan Singing Competition (national level). He was also the winner of the Lil Champs Zee SaReGaMaPa 2004. He has recently recorded a song for an untitled animation film, composed by Aadesh Srivastava and he's also sung a jingle for an insurance company. Having won the hearts of millions by his original and incredible singing skills, he is now all set to woo the viewers with his affable, jovial and friendly personality. Abhaas is set to grace the stage of AMUL STAR Voice of India – CHHOTE USTAAD as the host of the series. 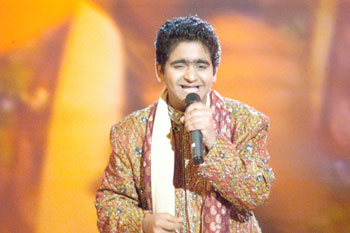 Featured Video
How does he feel donning this new role? “I am feeling really great. This is a big opportunity again for me to prove my talent. I know this platform will help me in future in my playback singing career too.” Now that he takes up hosting, do we take that playback singing will now be on hold? “I will carry on my playback singing side by side this hosting career. I am sure I’ll be able to do justice to both”, Abhaas replies with full confidence.

CHHOTE USTAAD, the new series of Voice of India, is focused towards bringing young talent between the ages of 8 to 14 years to the forefront. This musical show will have the most renowned names of Bollywood's music fraternity as its judges. Pritam Chakraborty, the popular music director and lead singers Kunal Ganjawala and Shreya Ghoshal will judge and mentor the kids on their singing abilities. After a series of auditions, Abhaas was chosen as the host of the series since he has an extensive knowledge of music and also fitted the role perfectly for a show that focused on young singing sensations.

Stay tuned and watch all the chirpy, bubbly and exceptionally talented contestants and ‘wonder child’ Abhaas on AMUL STAR Voice Of India - CHHOTE USTAAD premiering, Friday, December 9 at 10 pm only on STAR PLUS!!

LuvBombay 13 years ago The guy definitely needs more grooming, starting with his eyebrows, he also fumbles quite a bit, Aditya does come across as a better groomed and more polished host, I think he also controls the show better.

Umfaisal 14 years ago We want Shan as a host of 'Chhote Ustaad'!No doubt Abhas is a very good singer but we don't want him as a host of my favorite show. Please don't ruin the excitement! We luv Shan and demand him!

realone 14 years ago I think Alka told Gajji to take him, because he seem to be Alka adopted son

but Shaan is the super best

14 years ago Smart got somebody young like aditya narayan to host ,but gudluck for abhas.nice way to get name for urself in the music industry like aditya is doing.