View Profile
Amitabh Bachchan may have sung numerous songs for his films but the legendry actor surprised musical duo Vishal & Shekhar while recording a song for Eros International's 'Aladin'. 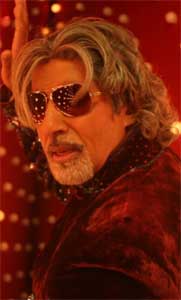 Featured Video
song in question is 'O Re Saawariya' that is already famous for Mr. Bachchan's signature pink pagadi & white kurta from his 'Namak Halaal' days.


The song is sung by Sudesh Bhonsle. While working on the song, at the spur of the moment Mr.Bachchan came up with an 'alaap' and hearing that the music directors Vishal and Shekhar decided to incorporate the 'alaap' in the song.


Says Vishal, "The alaap at the end of the song was never planned. Mr Bachchan came up with this impromptu addition which turned out so well that we decided to make it a part of the song."


What impressed everyone all the more, was the fact that Mr Bachchan, who is not really professionally trained, was able to sing it so well.


"Doing an alaap is not easy and requires thorough practice. But Amit ji did it wonderfully and that's really amazing." adds Vishal.


Interestingly, the film's theatrical promo opens with this rendition in AB's distinctive baritone.


Now that's what we call Big B's Midas touch that never ceases to fascinate us!