His fans and music lovers went back in time as radio stations and TV channels played old melodies of Kishore Kumar, the versatile Indian singer-actor-director-composer who would have been 80 Tuesday. 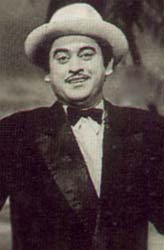 Featured Video
Often called a genius, he held sway over Bollywood playback music for two decades and is remembered to this day for his ability 'to create drama through singing'. No one has been able to take his place till date, say many in the industry.


Remembering him on his 80th birth anniversary, ace composer Anu Malek said: 'His birthday is a very special day and emotional day for me. I believe that he was made of made of music. I had this great fortune to work with dada when I was growing as a composer. I did many songs with him and that was a great experience.'


Malek said he listened to some of his everlasting songs in the morning and plans to watch any of his best films on DVD.


'He was a great soul...a man who was very romantic, emotional, loveable and adorable to the core. He was just plain honest. I can't put what he meant to me in words. He was a family man and just like a father to me,' Malek told IANS.


Born in Khandwa in Madhya Pradesh, he was one of four siblings who included famous actors Ashok Kumar and Anup Kumar.


Despite not having any formal training, Kishore Kumar dominated the Indian film music scene from the 1950s to the 1970s, making people laugh and cry with his performances.


He was a prolific vocalist and sang in many Indian languages, including Hindi, Bengali, Marathi, Assamese, Gujarati, Kannada, Bhojpuri, Malayalam and Oriya. He never shied away from experimenting, yoddling being one of the best examples of that.


'Kishore Kumar had this ability to create drama through his singing. He was one of those very few singers who had a certain amount of acting involved in their singing. With that he could easily create different characters and emotions through his voice, which was great. His singing was so effortless. People called him an Indian star but for me he was a world star,' said lyricist Prasoon Joshi.


'He was plain genious. I wish I had got the fortune of writing a few songs for him. He was so versatile,' he added.


According to singer-composer Shankar Mahadevan, Kishore Kumar was an ardent K.L. Sehgal fan and had a god gifted voice.


'I think the greatest musical talent that the indian film industry had produced ever is Kishore Kumar. His voice itself was a god given asset which did not require to have technical expertise, classical knowledge, etc. Only once in a million years can an artist like him be born,' he said.


Even young and budding singers look up to Kishore Kumar and consider him their inspiration.


'He is an ultimate performer, impeccable singer behind the mike, terrific professional and humour par excellence. A perfect artist with a blessed tone and unmatchable versatility. Nobody can be him. I am so inspired by him,' said singer Akriti Kakkar.