'It was my first schedule for 'Dil Bole Hadippa'. We were shooting the song 'Bhangra Bistar' and coincidentally Shah Rukh was shooting for 'Rab Ne Bana Di Jodi' and Aamir was shooting an ad at Yash Raj Films studios at the same time...they were all eager to see what I am doing in the song and if I am playing a man so they came and kind of gave blessing to our set in a way.

'It was really sweet because Aamir and SRK are two very special people in my life and I see their presence on the set on the first day of the shoot as a happy coincidence.'

Releasing Friday, the film will see the actress playing a man too. She is starring opposite Shahid Kapoor and took cricket lessons for the role.

Item girl Rakhi Sawant is trying her best to be a perfect mother on NDTV Imagine's new reality show 'Pati Patni Aur Woh' - she went on a shopping spree in the US to buy toys and clothes for the children she will be parenting on the show.

At different stages of the show, Rakhi will be taking care of kids from different age group -- from infant to adolescent.

According to a unit source, Rakhi purchased clothes for both boys and girls in the age group of six months to 10 years so that she can pamper 'her' kids on the show.

When Rakhi packed her bags to go from Mumbai to Goa, where the show will be shot, her luggage weighed around 60 kg.

'To manage all the stuff, she took her assistant and managers so that the weight of the luggage could be divided,' said the source.

But since contestants are only allowed a limited amount of luggage on the show, she decided to part way with her own clothes rather than the gifts she bought for the kids.

'Pati Patni Aur Woh' will have Rakhi and her Canada-based businessman fiance Elesh Parujanwala as well as four other celebrity couples, who will be relocated from their glamorous lives to become parents. They will have to take care of infants as well as adolescents in course of the show.

Actor Shiv Pandit, best remembered for his comedy show 'F.I.R' and his stint as a host for Indian Premier League (IPL) last year, is now set to star opposite 'Dev D' actress Kalki Koechlin in a movie.

Shiv has teamed up with Kalki in Bijoy Nambiar's tentatively titled 'Shaitan'.

'The world around me suddenly seems to be changing really fast. I never expected things to work out for me in Bollywood so quickly. I am now looking forward to shooting with Bijoy Nambiar, he is a brilliant director,' said Shiv in a statement.

This is Shiv's third Bollywood project -- he was earlier seen in UTV's 'Aage Se Right' and Quartet Production's 'Lets Enjoy'. A Delhi boy, Shiv has earlier worked as a radio jockey and has been a successful model for brands like Airtel, Sprite and Tide. 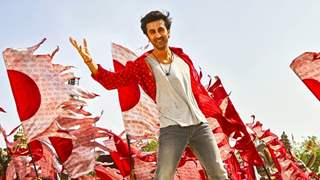