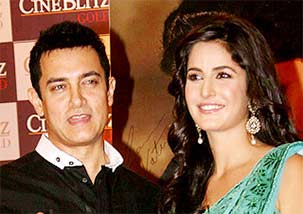 Actress Katrina Kaif, who is sharing screen space with Aamir Khan for the first time in "Dhoom 3", says Aamir loves cricket and Sachin Tendulkar more than her.

The actress was speaking at a press conference held to launch the film's title song.

Aamir Khan joined the press conference later as he had gone to watch Sachin Tendulkar in action during his 200th and final Test match being played at the Wankhede Stadium here against the West Indies..

"Aamir is a little delayed because he has gone to watch the match. Aamir loves cricket more than he loves me. Aamir loves Sachin more than me, so he has left me alone for this press conference," Katrina told reporters.

Aamir later said the cricket match was at a "historical moment".

"Sachin will make a century tomorrow (Friday). It's a historical moment for us," he said.