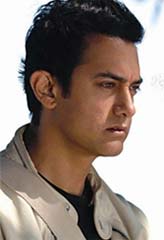 Aamir Khan, the perfectionist, has now apparently given his nod to appear on the idiot box with Yash Raj's next venture "rishta.com" which is rumoured to be telecasted on Sony TV. It is very well known by now that Aamir was very apprehensive about appearing on a television show before but he now seems to have put aside all his apprehensions and is very keen to work on this show. The main reason behind this change is said to be attributed to the fact that this show is based on reality.
Aamir however is not the only celebrity touted to be on this show. According to various other reports the big stars that might be making an appearance on this show are Shahrukh Khan, Rani Mukherjee, Preity Zinta, Ritesh Deshmukh, Tabu and Uday Chopra. According to more sources it is known that YRF was very keen on having Aamir on their show so they pursued him relentlessly which is contrary to the fact that they have always touted Shahrukh Khan as their blue eyed boy.
The details of Aamir's role has not been divulged yet but knowing perfectionist Khan it must be something different as he is known to be experiment with his roles. Moreover, from the looks of things YRF will leave no stone unturned to make their television debut a grand event and who else other than perfectionist Khan to make that happen?
Featured Video