Tinsel town's hottest diva Kareena Kapoor, who had almost signed up for Aamir Khan's next is now in a dilemma as the lady is also committed to an upcoming Karan Johar film. Both Reema Kagti's movie starring Aamir and Karan Johar's Short Term Shaadi in which Imran Khan plays the male lead start shooting in February 2011. 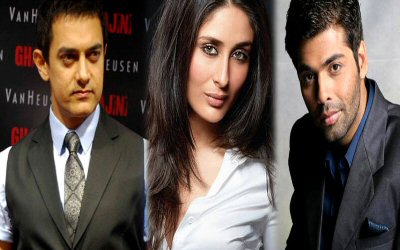 It's disclosed that Aamir had shortlisted three actresses : Katrina Kaif, Kareena Kapoor and Priyanka Chopra. If Kareena were to choose Karan over Aamir, one of her rivals would get the role in Aamir's movie and that would obviously not suit her well.

To add more troubles for the damsel in distress, Karan Johar is unable to postpone the shooting anymore mainly because of Imran; it has already been delayed since Imran's wedding will be in January 2011 and also to let him complete the shooting for the remaining portions for YRF's Mere Brother Ke Dulhan. The worst is that Kareena-KJo's relationship is already strained as a result of Kareena leaving Kjo's film in the past.

Meanwhile, Aamir still waits for an answer from Kareena so he can go ahead with the casting of another actress. Although only Katrina and Priyanka are currently being considered for the project as divulged, rumor mills are churning that Rani Mukherjee is a strong contender for a supporting role in the movie.

And why wouldn't she? Back in 1998, her first hit was Ghulam with Mr Perfectionist himself. As per Aamir, only Rani can do justice to the role as it's a strong, powerful, performance-oriented one.

If things go fine, Kareena and Rani might be able to work together again on the silver screen after 8 years. The close friends turned enemies, and polite co-stars may even get the chance to start their friendship afresh.

All's well that ends well, and that's exactly how we hope this will end.