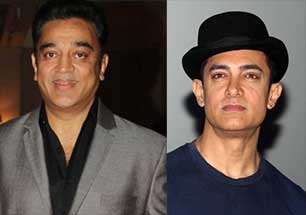 The presence of Aamir Khan and Kamal Haasan, India's two finest film personalities, at the opening ceremony of the 11th Chennai International Film Festival (CIFF), turned the evening unforgettable for the audiences and organisers as well here Thursday.

Organised by the Indo Cine Appreciation Foundation (ICAF) in association with the government of Tamil Nadu and several luminaries of Tamil film fraternity, the eight-day extravaganza (Dec 12-19) will screen 163 films from 58 countries.

The event began with the musical performances of playback singer Karthik and pianist Anil Srinivasan, who played some of the evergreen Tamil hits of Illayaraja to a packed hall here.

Karthik dedicated a couple of Hindi songs such as "Behka" and "Phela Nasha" to Aamir Khan, who attended the festival as the chief guest.

The musical show was followed by dance performances by TV anchor-dancer Swarnamalya and actress-dancer Shobana. Later, the performers of the evening received mementos from Kamal Haasan and Aamir Khan.

This is the fourth year in a row; CIFF has introduced a special competition section for Tamil films. Actress, writer and dubbing artist Rohini introduced the jury for this section which constitutes R. Sripriya, S. Ramakrishnan and R.V Udayakumar.

As many as 12 films such as "Soodhu Kavvum", "Aadhalal Kadhal Seiveer", "Haridas", "Paradesi" and "Kumki", among others, will battle it out for the prize money of Rs.6 lakh.

Answering one of the questions by legendary singer S.P Balasubrahmanyam on the need for qualified critics in censor board, Haasan said: "I strongly feel only qualified people should be there in the censor board. Industry should take responsibility of censorship."

"The people we have on our censor board are not qualified. They like cinema, they may be watching films regularly but that doesn't make them experts. All political parties want one of their members to be part of the censor board and that's wrong," Kamal added.

Aamir spoke about the need for a chain of theatres to screen international films in the country.

The festival was also graced by international film personalities from other countries including Serbia, France, Iran, Ukraine, Poland, and Mexico.

This year, CIFF will have retrospectives of international filmmakers such as Goran Paskaljevic from Serbia (seven films), French filmmaker Claire Denis (five films) and Istvan Szabo from Hungary (three films).

The festival will also have a special section showcasing six films from contemporary Turkey apart from a country focus on Taiwan and Iran as well.