View Profile
If there is one actor in the Bollywood industry that is a known killer combination of actor-director-producer, it would be Mr. Perfectionist, Aamir Khan himself.
Since he has made his acting debut, he has entertained the nation and the world with hit film after hit film. From the romance of Qayamat Se Qayamat Tak to the comedy in Andaz Apna Apna, leading to the history behind Lagaan: Once Upon A Time In India to the action of Ghajini, Aamir has done it all.
The ever talented man has also produced hits, not just simply starred in them. Among the many movies in his list, one is Jaane Tu...Ya Jaane Na which launched the career of his nephew, Imran Khan. His directorial debut Taare Zameen Par was lauded all over the world by critics and public alike.
Well-known for making films that do not simply entertain but spread a social message to the masses, both Taare Zameen Par and 3 Idiots were a sensation all over the world, and are some of the highest grossing projects of B-Town. Aamir's latest film Dhobi Ghat, which released on the 21st of January 2011, is already being anticipated and those that have already caught it are in no short praise of it.
All of this (plus his tremendous brain-power) has led to Aamir Khan being hailed as 'India's Most Powerful Entertainer' by one of the leading show business magazines. He graces the cover of the January edition of Hello! magazine in an Indo-Western look with a stunning smile, looking every bit of powerful yet approachable.
We at BollyCurry wish Aamir Khan our sincerest congratulations for this honour and our best wishes for all his future ventures. 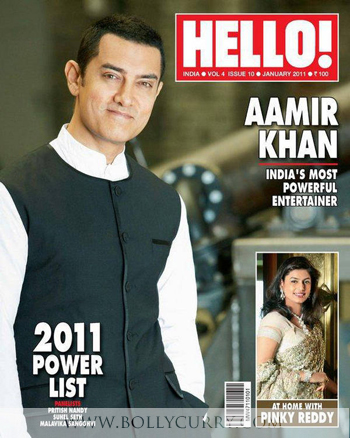