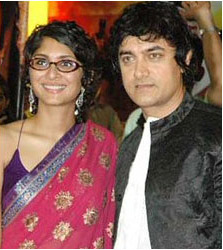 Once again, Aamir proves that he is a very good husband material. Recently, inspite of his busy schedule, he made his presence on his wife Kiran’s birthday and now the actor is going to be a part of her debut directorial venture, ‘Dhobi Ghaat.’
It happened like after returning from Los Angeles Aamir, had a discussion with Kiran about the movie. And on his next routinal visit to the sets of ‘Dhobi Ghaat’ he shot a scene with Prateik Babbar. It’s known that Aamir was very clear that he would be a part of it only if Kiran needed him.
This film will see many newcomers coming in and presence of such a big star in the film can work to its benefit.
The debutante Kiran, is very keen about her project and is looking after every aspect of it by herself.
This flick is produced under Kiran’s own production house ‘Cinema 73’; it will come under the Aamir Khan Productions banner. The film is being shot in various untouched parts of the city.
The setting and title of the film suggests it to be a based on realistic subject. What you think about it?
Featured Video