Jeevan Saathi’s love Jodi, Neil and Viraj(Gaurav Khanna and Vani Gupta) have finally been separated by Vikramaditya, and with this there is a twist in the tale in the COLORS show!! 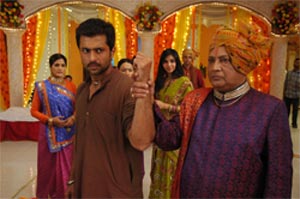 Featured Video
At this point enters Ishwar, a small time worker in Vikramaditya’s factory who lacks confidence and is very subdued in nature.

Hemal Thakkar, Producer, Playtime Creations quips, “Aamir Dalvi plays the role of Ishwar, and it feels nice to work with such a good actor. His will be a long running role, which will bring in many more twists”.

Much against her wishes, Viraj will be married off to Ishwar by Vikramaditya in order to punish his daughter. Ishwar gets caught between them for no fault of his and bears the brunt of their actions.

Aamir Dalvi will enter this Monday. We tried talking to him, but the actor was unavailable for comments.

It is now to be seen whether Viraj accepts Ishwar as her husband or not!!

13 years ago good to see Aamir back on television again... will definitely watch him!

gr8nvfan 13 years ago extremely sad twist,.....i won''t be seeing this ..serial anymore.no one should hav a father like vikramaditya...he and his brother are nothing but goondas....intercaste marraige is a very sensitive issue and such sad ends will only discourage people to fall in love and all will suffer in loveless marraiges like kamakshi and jignesh....

+ 2
13 years ago oh plssss unite neil and viraaj.aamir is a good actor but this twist is so not needed.