View Profile
If you think the tasks on Sony Entertainment Television's Iss Jungle Se Mujhe Bachao are pretty innovative, then get this,  so are the prizes. 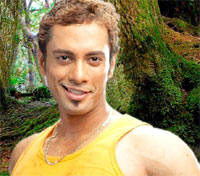 Featured Video
According to our source, "The contestants were given the Treasure Hunt Task where they had to peel sweet potatoes and find the right key to a trunk and Aakashdeep won that task. That earned him 'Jannat' which literally means heaven. Jannat gives Aakash the chance to spend the night in a lavish tree top house with a bed for a night with one companion."

If given a chance to make a guess we would have probably pointed out Aakash's best friend Chetan or his latest eye-candy Negar as the prospective partners for his one-night-at-the-tree-top. But Aakash didn't choose both of 'em! Our source reveals, "Aakash chose to take Marc with him. It is a baffling choice. But that's the way Aakash wanted it to be!"

Our source also discloses that, "When the contestants were offered with sweet potatoes as part of the task, they were taken over by some eerie emotion which probably was the result of days in the jungle. They started eating the sweet potatoes instead of concentrating at the task in hand, some even started dropping them in their bags in an attempt to save food for the future," says the source.

Oooh! Seems like the jungle has actually turned them junglee!

13 years ago he's ugly and what he did to anaida shows how ugly he really is.

+ 2
13 years ago I can't stop larfing dat Ur last Comment... n I 4got whole thnk of Akash Except junglee ppl..