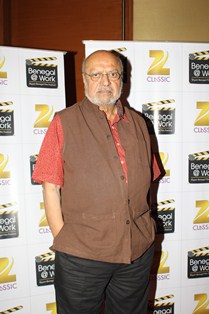 Launched in April 2004, Zee Classic is India's only Hindi movie channel that shows films from the classic era of Hindi cinema. In addition to bringing alive the magic of these evergreen masterpieces, the channel constantly endeavours to also acquaint viewers with the greats who made a significant contribution to  this Golden era and made the industry what it is, thereby standing true to its promise of bringing forth Timeless Movies. Timeless Moments'!

The legendary man Zee Classic salutes this month was awarded the Padma Shri in 1976 and the Padma Bhushan in 1991. A recipient of the highest honour for an Indian filmmaker - the 'Dadasaheb Phalke Lifetime Achievement Award', he has walked away with the National Award 7 times over for his films. Critical acclaim, standing ovations at the most prestigious film festivals, the most esteemed awards and rave reviews from the more discerning segments of the audience have been the pillars that have built the prolific film career of the legendary Shyam Benegal.

Ushering an all-new era of alternate Indian Cinema with his very first four feature films, Benegal has truly been a path-breaker all along. Being a channel that showcases and celebrates classic films, highlighting their relevance to the youth of today, it is only befitting that Zee Classic raises a toast to the genius of Benegal, a man whose body of work shaped the contours of cinema in the 70's and 80's. Starting 11th January, Zee Classic will air Benegal @ Work', a showcase of some of Shyam Benegal's finest masterpieces ... some of the most impactful films that define his style and let audiences experience the magic of his storytelling.

The festival kicks off with Benegal's debut film 'Ankur', a story of economic and sexual exploitation set in his home state Andhra Pradesh The film introduced prodigal actors such as Shabani Azmi and Anant Nag and won Benegal the 1975 National Film Award. Shabana won the National Award for Best Actress. Benegal's Trikal' captures the transition of Goa from being a Portuguese colony to a district governed by India. Liberally sprinkled with dashes of humor, this is a fast-paced comedy about a family and their friends who lived in Goa through this interesting phase of its evolution.

On 25th January, catch 'Bhumika - The Role', a film broadly based on the memoirs of the well-known Marathi stage and screen actress of the 1940s, Hansa Wadkar who led a flamboyant and unconventional life ... the film focuses on an individual's search for identity and self-fulfillment. The immensely talented Smita Patil gave one of the most inspired performances of her career, transforming herself in its course from a vivacious teenage girl to a wiser but deeply wounded middle-aged woman. Mandi' is a satirical comedy on politics and prostitution. Based on a classic Urdu short story Aanandi by Pakistani writer Ghulam Abbas and starring acting heavyweights such as Shabani Azmi, Naseeruddin Shah and Smita Patil, it's a must watch! Benegal's Nishant' captures the tyrannical power-play of the high-handed Zamindars and brings you the struggle of a rape victim for justice when the perpetrators of her torment happen to hail from the Zamindar's clan. The Benegal @ Work' festival is something every film aficionado should mark out on their calendars and not miss for the world!

Zee Classic has the largest library of Hindi movies with over 300 exclusive titles from 1940 to 1970. These films have been digitally remastered so that viewers have the best possible experience of these evergreen films. Classics like Awara, Mother India, Shree 420 and the best works of legends like Raj Kapoor, Kishore Kumar, SD Burman, Guru Dutt, amongst many others, are just a few in Zee Classic's vast library.