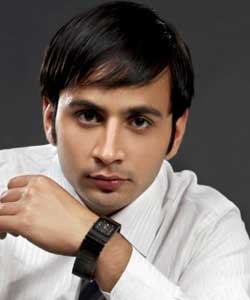 A new entrant in the form of a patient is soon going to enter Gauri (Anjum Farooqi)- Jagya's (Shashank Vyas) lives in Colors' Balika Vadhu with a promise to be create a turmoil.

Nikhil Sahney who is currently seen on Imagine's Sawaare Sabke Sapne - Preeto as Ranjeet has been chosen to play the role. He will be seen flirting with Gauri which will make Jagya insecure and this will create problems between them.

"I will be playing an interest character in Balika Vadhu. I will enter as a patient who is fun loving. He will flirt with Gauri which will  make Jagya uneasy. I can't reveal more but I am playing two different characters in two shows as in Preeto I am a negative guy," gushes Nikhil.

Nikhil's character is supposed to be cameo as of now.

So once again Gauri-Jagya will see some testing times in the show!

craziekudi 8 years ago what the hell.. if he would have come for anandi.. then it would have been interesting...

by the way jagya is always jealous.. about either anandi or gauri... whats new in that!!!

Wanderbug 8 years ago are they trying to copy the famous izzie-denny-alex plot from grey's anatomy here? if so...i can say this..it will be super crap!

Shaina_b 8 years ago This show is seriously crap!!!!

prassy.kavi 8 years ago now jagya will understand what is a real pain. he deserves that.

gwynn24 8 years ago Actually this is a good show. It doesn't promote child marriage hence Anandi, though a great girl, can't have an easy life, or else people will think that a child marriage is the best option. Her hurdles prove that child marriage is bad, her trials prove a woman's strength in the face of social norms. Though I hated wot Jagya did, it was also part of the concept. And after him saving Anandi, i like him a bit now. Hate Gauri, she should run away with this nikhil fellow...self obsessed, insecure, psycho :)

serialjunkie 8 years ago who is this chipkali looking fellow!! yuck!

Rolzz 8 years ago The story is supposed to be Anandi's..not about the nokh_jokh's is jaga!!

Kangana Shares Video of Anurag Confessing To Have 'Abused a ...
29 minutes ago