Star Plus’ Kayamath is going for a 4-year leap and a new Bengali family is going to be introduced this Thursday, September 10th.

The post leap will show Prachi (Panchi Bora) in the Dasgupta household where she is wedded to Proteek Dasgupta played by Gaurav, a newcomer to television. 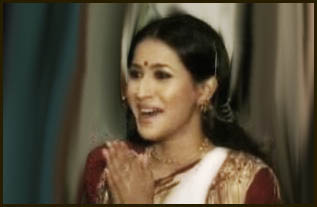 Featured Video
Telly Buzz talked to Panchi Bora to know more on the post-leap story. “I am very much missing the Shah family, Sanjeeda, Shabbir and Jay. But I am sure that the new family will be accepted by the viewers”, says Panchi.

When asked about the reasons for her re-marriage in the serial, Panchi says, “Well, I cannot disclose much but I can tell you that Prachi has not suffered from a memory loss and she has a genuine reason for getting married”.

However, a well-placed source from the production house informs us that, “Prachi has got into a ‘samjhauta’ with Proteek and has married him just for her kid”. For the uninitiated, Prachi was pregnant with Milind’s kid when she left him. “Prachi has stayed away from Milind to keep him safe and secure; at the same time, she is a good mother to her little son”, says our source.

We further talked to Sandiip Sikcand, Senior Creative Director, Kayamath to know more on Milind and Prachi’s future. “I can only say that the leap will bring in a new flavor, and a fresh love story between Milind and Prachi. Fans can breathe a sigh of relief as Mallika will not be seen at least for sometime post leap”, says Sandiip.

With the leap, many characters of Kayamath will go missing, and one big name happens to be Jay Bhanushali. Jay had his last shooting schedule for the serial yesterday, and the actor now misses the serial that gave him recognition. “I will miss the entire unit and cast. Kayamath was my first big project and it feels bad to be out of it. But all good things need to come to an end”, says Jay. When asked whether there will be a comeback for Neev, the actor states, “As of now, there is nothing planned”.

As Panchi Bora puts it, Kayamath is all about ‘Changing Relationships’ and the viewers will surely wait with bathed breath for their most popular Jodi MICHI to get together!! But for now, the focus is on the new Bengali family and of course on Prachi who adorns a Bengali look, as Milind aka Shabbir Ahluwalia is given a much needed break to cool his heels!!

13 years ago The sole reason I''l be watching the show will be for Milind only, and will wait for Milind and prachi's fresh love story, if and when they show it.

13 years ago please reunite Michi..Shabbo come back soon..we miss u

13 years ago i cannot believe they took out the michi angle and what's with the new married angle??? she's already married and you cannot marry someone else legally if you are already married... and please dun bring in a new love angle between prachi and this proteek... and yes its about changing relationship but uts also about everlasting love!!!!

13 years ago its good that this leap brought an end to neev i dunno what was left with his role... i loved neev and prachi together but i fail to understand why they brought in the'michi' angle anyway hope jai does good in oder shoes and i will continue to watch him anywhere :)

+ 2
13 years ago Ohhhhh noooooooo
Jai was hero he is going
Whats this???
Anyways thanx

+ 3
13 years ago todays epi was so emotional...will miss all da michi moments now...

+ 2
13 years ago i already miss sanjeeda so much and now am gonna miss jay terribly:(