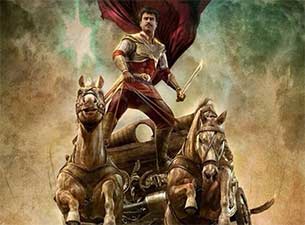 A Rajinikanth film gives audiences enough reasons to throng cinema halls, but here are select reasons for which the superstar's ardent fans will watch his forthcoming release "Kochadaiyaan", in which he features in an animated format for the first time.

Directed by his daughter Soundarya R. Ashwin, "Kochadaiyaan" releases worldwide Friday on nearly 6,000 screens and IANS lists down the highlights of the film that will lure the hardcore Rajini fans:

- Thalaivar's return to silver screen: His long absence from the silver screen is one of the reasons. Rajinikanth was last seen on the screen in 2010 Tamil film ace "Enthiran". His fans feel they've waited too long to see him back on screen. Therefore, despite its release being postponed multiple times, there's a strong buzz around "Kochadaiyaan".Rajini's Rudhra Thaandav: He has wowed fans across the globe with his distinct style - be it his punch lines or his cigarette stunt, but Rajinikanth has always refrained from dancing because his dancing skill is limited to a very few steps. But in "Kochadaiyaan", he will be seen performing Rudhra Thaandav, which fans are excited about.

Motion capture technology: "Kochadaiyaan" is said to be the country's first film to be made using motion capture technology, which has been used in the west in films such as "300" and "The Hobbit" series. While the film's trailer may have received a mixed response, Rajini's fans believe there will be something in the film to entertain them and therefore, they'll watch it.

Rajini-Rahman combo: Rajini and double Oscar-winning composer A.R. Rahman have collaborated for the sixth time for the film. Their combo has always resulted in chartbusters and proof to it is the music of "Kochadaiyaan". Fans feel this is one of the important reasons why they will watch the film despite Rajini featuring in it in 3D animated form.

Rajinikanth's Hindi dialogues: A Maharashtrian by birth, Rajini can speak Hindi fluently and it would be foolish to think he has fans only in the Tamil language. For all his north Indian fans, watching the superstar mouth dialogues in Hindi for the Hindi version of the film after a long time would be a moment to cherish. The last time Rajini delivered dialogues in Hindi was more than a decade ago in Anil Kapoor-starrer "Bulandi".

Digitally recreated Nagesh: Tamil comedian Nagesh, who died many years ago, features in a special role in "Kochadaiyaan". The thespian has been digitally recreated on a special request from Soundarya. Fans are eagerly looking forward to seeing one of Tamil cinema's finest artists on screen one last time.

Rajini-Deepika romance: For the first time in her career, Bollywood actress Deepika Padukone has shared screen space with the superstar in the film and audiences believe the romance between the two is something to look forward to. A special song, in which Deepika dances alongside a white peacock, is said to be one of the highlights.

High-octane action: If you've watched the trailer of "Kochadaiyaan", the action in it might have caught your attention. The film has plenty of awe-inspiring action sequences featuring Rajini pulling off most impossible stunts.

Father-daughter bond: In Indian cinema, Soundarya Rajinikanth is perhaps the first filmmaker to direct her own father. Audiences want to see the impact of the father-daughter bond in the film. Soundarya had said earlier that directing her father was a challenge because he's extremely professional.

Rajini factor: A true Rajinikanth fan would watch a film featuring the superstar because it has him in it. He or she doesn't need any special reason to watch his film.