Is Prabhas Dating Kriti Sanon? Sources Claim Adipurush Co-Stars Have 'Strong Feeling for Each Other' 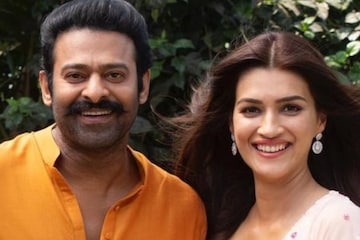 It is rumoured that Prabhas and Kriti Sanon are dating.

If a new report is to be believed, Prabhas and Kriti Sanon might be dating. However, the Adipurush co-stars are allegedly taking things slow.

Are Prabhas and Kriti Sanon dating? Well, fans have been wondering if they share a ‘special’ bond after the Adipurush star surprised everyone by calling Prabhas during a calling segment in Koffee With Karan. While the actors have not reacted to the buzz that the phone call created, a new report has claimed that there could be a romance brewing between Prabhas and Kriti Sanon.

If sources of BollywoodLife are to be believed, Prabhas and Kriti Sanon have ‘strong feelings’ towards each other. They have apparently bonded well on the sets of Adipurush from the first day. Their bond seemed to surprise everyone, especially since a shy person like Prabhas is ‘openly talking to Kriti and is so indulged in the conversation with her.’

“There is something special about friendship that has been started but it is too early to jump the gun as it seems like they both are going very slow until they confirm anything to the world," the grapevine claimed.

“Despite wrapping up the film months ago their bond is still intact. They never fail to make a call or message to each other and this only proves that they have this mutual admiration for each other but calling it a relationship will be too quick. Well, it is common for co-stars to be linked up while they are shooting their films or even promoting them together, but Kriti and Prabhas are different. They indeed have a strong feeling for each other and only want it to get processed naturally and not rush," the source added.

Last year, Kriti opened up about her first impression of Prabhas in an interview and said that at first, she thought he was shy but he was unstoppable after they began chatting. “He is a foodie, and loves feeding his co-stars," she told Mid-Day in March 2021.

Adipurush is set to release on January 12, 2023. Besides Prabhas and Kriti, the film also stars Saif Ali Khan.

I don't think its true because recently Prabhas's uncle passed away and he was very sad and upset at his last rites.

While this was happening, kriti was holidaying with her family in Europe.

But does she eat?

Can't wait to learn all about it eventually in KWK S8

But does she eat?

Kriti's PR is on an overdrive these days. I mean superstar Kriti.

Wasnt it Kriti who was part of Karthik's recent Bday video and refused to even take a bite of the bday cake?

Or was that someone else?

Off sugar, off salt, off oil, off carbs. Prabhas be like: