Will Smith resigns from the Academy and issues statement 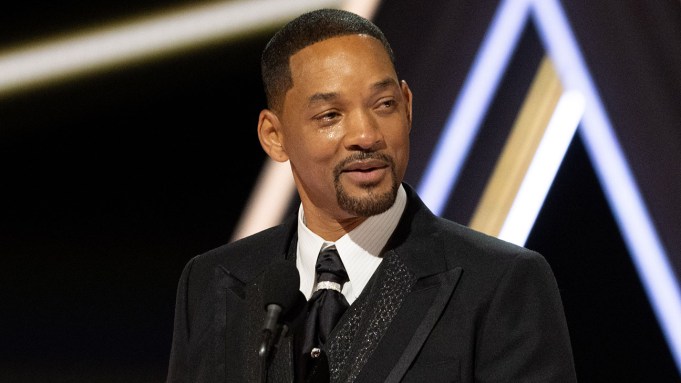 Will Smith accepts the best actor Oscar at the Academy Awards at the Dolby Theatre in Los Angeles on March 27. COURTESY OF BLAINE OHIGASHI / A.M.P.A.S.

In the wake of slapping Chris Rock onstage at the Oscars, Will Smith said Friday that he is resigning from the Academy of Motion Picture Arts and Sciences.

In a statement obtained by The Hollywood Reporter, Smith said he was heartbroken and would accept all consequences for his conduct during Sunday’s ceremony.

“My actions at the 94th Academy Awards presentation were shocking, painful, and inexcusable. The list of those I have hurt is long and includes Chris, his family, many of my dear friends and loved ones, all those in attendance, and global audiences at home,” Smith said. “I betrayed the trust of the Academy. I deprived other nominees and winners of their opportunity to celebrate and be celebrated for their extraordinary work. I am heartbroken. I want to put the focus back on those who deserve attention for their achievements and allow the Academy to get back to the incredible work it does to support creativity and artistry in film.”

Earlier this week, the Academy began disciplinary proceedings against Smith after a meeting of its board of governors, and issued a statement saying Smith was asked to leave the show following the slap but that he refused. The statement didn’t provide details, but acknowledged that the Academy “could have handled the situation differently.” One board member told THR that it still wasn’t made clear who asked Smith to leave, or the sequence of events, while two other sources said there was never a request made directly to the actor.

Smith’s resignation means he can no longer vote for the Oscars — but he can still be nominated for Academy Awards, attend future ceremonies and keep the statue he won. Still, the Academy’s formal review will continue.

“We have received and accepted Mr. Will Smith’s immediate resignation from the Academy of Motion Picture Arts and Sciences,” Academy president David Rubin said in a statement. “We will continue to move forward with our disciplinary proceedings against Mr. Smith for violations of the Academy’s Standards of Conduct, in advance of our next scheduled board meeting on April 18.”

The actor said in his statement Friday that he has responded to the Academy’s disciplinary hearing notice and “will fully accept any and all consequences” for his conduct.

Rock was presenting best documentary feature at the Oscars on Sunday when he made a G.I. Jane joke about Smith’s wife, Jada Pinkett Smith, who has a shaved head (the actress has alopecia). Afterward, Smith walked onto the stage, slapped Rock, then returned to his seat where he shouted at the comedian to keep his wife’s name out of his “fing mouth.”

Later in the show, while accepting the Oscar for best actor for his performance in King Richard, Smith made a tearful apology to the Academy and fellow nominees. But it wasn’t until Monday, in an Instagram post, that Smith apologized to Rock. Rock has remained mostly silent, telling the audience at his comedy show in Boston on Wednesday night, “I’m still kind of processing what happened. … So at some point I’ll talk about that shit. And it’ll be serious, and it’ll be funny.”

In an interview that aired Friday on Good Morning America, the producer of the 2022 Oscars telecast, Will Packer, said he initially thought Smith smacking Rock was a bit, until Rock came backstage and confirmed that he had really been hit. “Once I saw Will yelling at the stage with such vitriol, my heart dropped. And I just remember thinking, ‘Oh no, oh no. Not like this,’” recalled Packer. “Chris was keeping his head when everyone else was losing theirs.”

Packer said Rock insisted he was fine and refused to press charges when approached by the LAPD.

This mofo hasn’t even personally apologized to Chris but goes around issuing public remorse and apologies about his action. Stop wasting time on this fraud and his family

Still waiting on Jada to receive an apology.

Still waiting on Jada to receive an apology.

In public, yes but not in private. Similar to what that other hack Chrissy Teigen did to Courtney Stodden. Smoke and mirrors is all that this is

Can we wrap this up by Monday? I’m honestly bored of this controversy, it’s not even a big deal according to me

What a bald move.