Sorry if you got excited but there's no photos. It's not even her interview. She was simply mentioned in someone else's interview, Ajay Devgan to be precise.

On the far right column...

Journalist: Karisma's sister Kareena also intends to become an actress.. Would you advise her to join the industry?

Ajay: Who am I to advise her? If Kareena's keen and ambitious , she'll go ahead. Before you ask me your next question, let me tell you that

if I  am ever offered a film with her, I'll sign it. 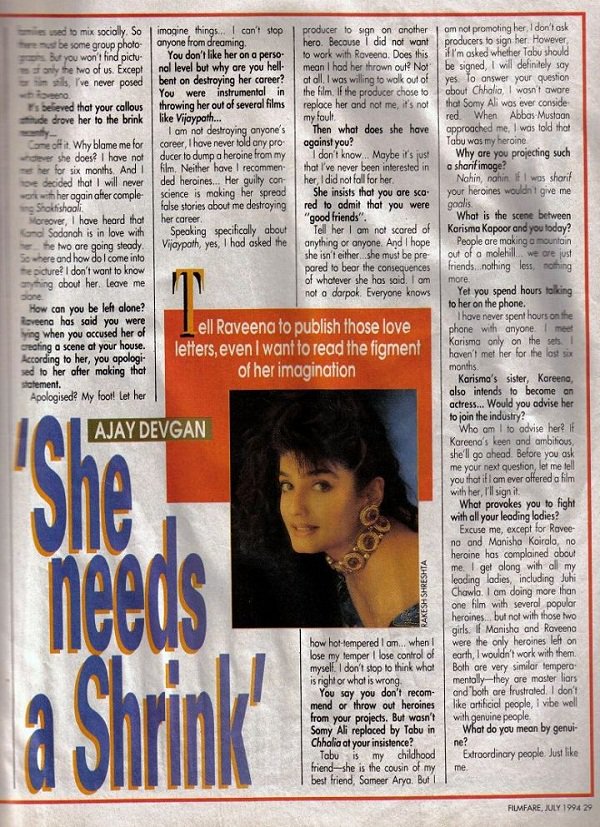 It's kinda crazy how Kareena is mentioned in the leading Bollywood magazine, 6 whole ass years before her debut film is released. Her age at the time of publishing would have been 13 and half.

Karisma was dating Ajay at the time, which is why they probably asked him the question... and of course Kareena would attend her sister's shootings and events.

I don't know if it's borderline or super creepy that he, as a 25 year old man is talking about a 13 year old being his potential future co-star.

They did eventually work together in a few films, I think the first one was Omkara in 2006.

Even saif kareena have a 10 year age gap

wow! I never knew that these articles were so masaledar and funny.

It's the first time I read such BW article.

Even saif kareena have a 10 year age gap

wow! I never knew that these articles were so masaledar and funny.

It's the first time I read such BW article.

My cousin's wife had hundreds of these magazines from the late 70s to mid-90s stored in one big brown box - I spent as much time as I could to get through the juice, many summers ago.

You can google random magazine issues and sometimes you'll get scans that are big enough to read, try: "cineblitz january 1995" or "movie magazine june 1985" or "filmfare magazine april 1991" or any random combination for some quick fix.

If these mags were available now, they would cause a SCANDAL... the kinds of things that were written in the 70s and 80s is shocking. My thirteen year old self was quaking.

Werent there story of him not wanting to work with dark skin actress .. Real journalist used to have such good questions

yes, it’s not right to talk about romancing a minor and sounds creepy

But since she is a kapoor, it was likely she would be in the business to stay like her sister

Also the fact that he was dating her sister 😭

He is just looking forward to work with her.

Also, the  Kapoors were much big thing in the 90's (and earlier) than they are today. They were the "Gods" of the industry, everyone wanted to work with them. So this is more about booking his role with the future star than romancing her.